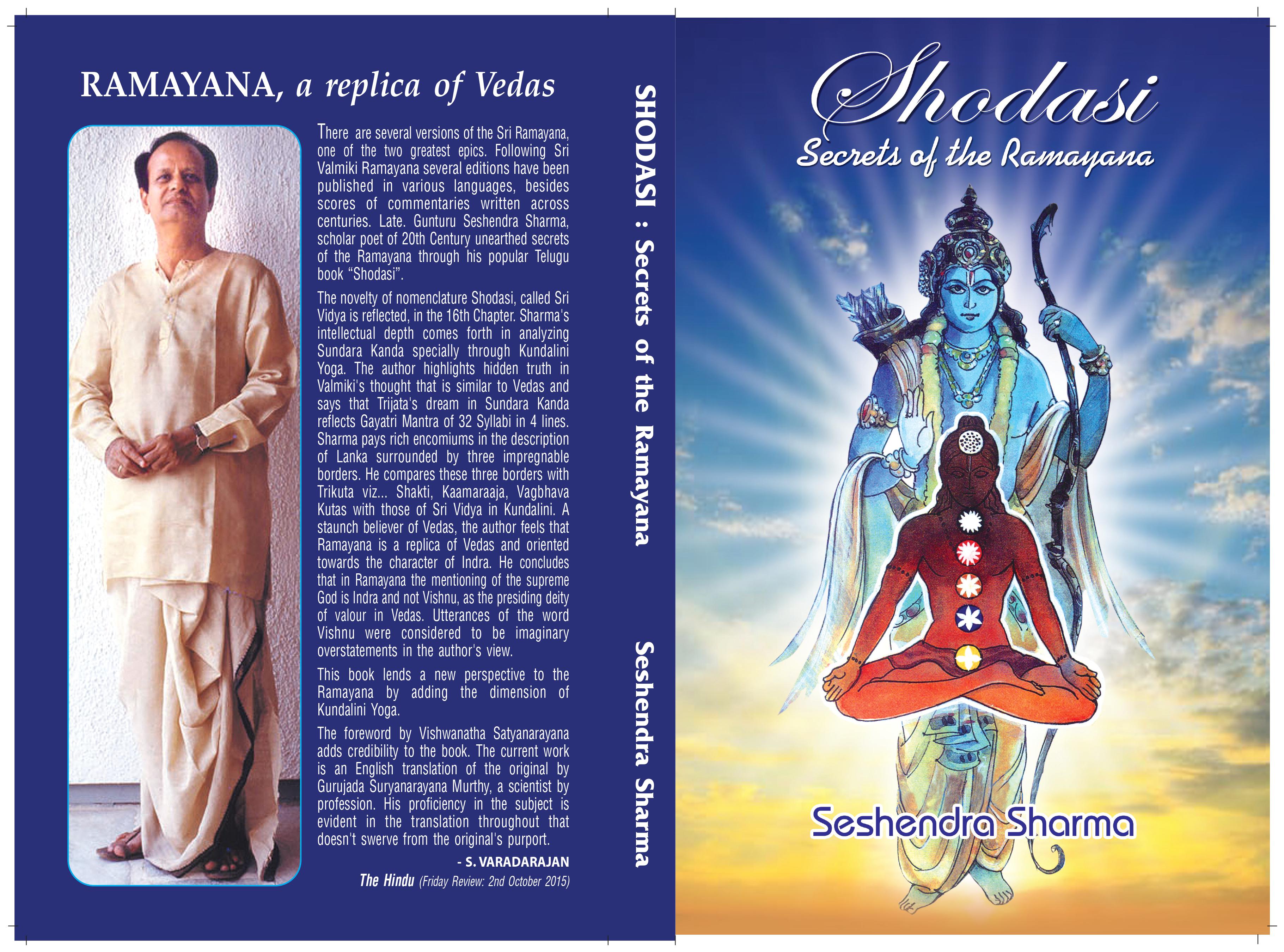 Shodasi : Secrets of The Ramayana

SHODASI : SECRETS OF THE RAMAYANA Kundalini Yoga & Gayathri Mantra in Valmiki Ramayana ENGLISH HINDI AND TELUGU ORIGINAL AUTHOR : SESHENDRA SHARMA Seshendra : Visionary Poet of the Millennium http://seshendrasharma.weebly.com https://seshen.tributes.in/ REVIEWS : https://www.facebook.com/shodasi/ Books : https://kinige.com/author/Gunturu+Seshendra+Sharma Valmiki , The Sage of 5th century B.C wrote The Ramayana not to narrate the story of Rama in an absorbing style. Though the epic poem presents Rama’s Journey of life in enchanting poetry , the story and the enchanting poetry are sugar coating or honey to the organic medicine called Kundalini Yoga. Maharshi Valmiki wrote the Ramayana to spread / propagate Kundalini Yoga among the masses. Thus the soul of The Ramayana is Kundalini Yoga / Sri Vidya. Valmiki embedded Kundalini Yoga in the Chapter titled “ Sundara Kanda” . Hanuman and Ravana are Kundalini Yogis of Samaya and Kaula Paths. And in Sundara Kanda , he inserted “ Trijata Swapna “ , dream sequence of a demon and in it embedded the Gayathri Mantra. The concepts of Vishnu and Avatar (reincarnation) were nonexistent during the Ramayana Period. Seshendra Sharma , Scholar - Poet in his Magnum Opus of Research “ Shodasi : Secrets of The Ramayana “ reveals these secrets lying hidden for thousands of years . * * * * * How old is Valmiki Ramayana? One Calculation says 8 lacks 70 thousand Years. Going by the Christian calendar dating to approximately the 5th to 4th century BC. According to Indian classification of time Ramayana belongs to the Treta Yuga and today we are in the Kali Yuga. All these millions of years the human civilisation the world over, recognised it as the first poetry and in this part of the world i.e. the Indian Subcontinent the central character of the epic is present as an idol of worship in thousands of temples and in every household of believers. But here is a research work which says Ramayana is merely poetry to the naked eye whereas it is an ensemble of invisible secrets which have been lying unnoticed all these ages. What could have been the Valmiki Maharshi’s vision which made him chisel an epic poem which is pregnant with startling secrets? Shodasi : Secrets of the Ramayana , a Magnum Opus comprising both revelations and research findings written in Telugu 47 Years ago is translated into English by Dr. G.S.Murthy , a 86 year old physicist (Retrd) from BARC. Dr. Murthy observes about Shodasi that “the approach adopted by Seshendra Sharma is unprecedented. .. His conclusion that Ramayana is closer to Sruthi than any other scripture is very significant and is based on the intrinsic evidence in the Ramayana itself.... it is a revolt against the customary methods followed to understand the status of Ramayana in the Sanskrit Literature.” The fulcrum of Shodasi is that poetry in Ramayana is a supplement to the bitter medicine called “Kundalini Yoga” and Ramayana is divine Ambrosia for all mundane afflictions and problems that beset the human kind. Seshendra reveals that Sundara Kanda is the heart of Ramayana and it is nothing but Kundalini Yoga . And the heart of Sundara Kanda is Trijata ‘s Dream , which is nothing but Gayatri Mantra. Kundalini Yoga which is also known as Sri Vidya is awakening of inner powers dormant in humans through meditation. The very 1st Shloka of Sundara Kanda is analysed and explained exhaustively by the author from several angles. “Chaarana Charithe pathi..(Sky-Path) “is , according to the author the Sushumna in Humans. Lanka Dahana ( Reducing Ravana’s Empire Lanka to ashes ) is the climax of the Kundalini Yoga which is Sahasrara Bhedana. The author analyses citing evidence from the Ramayana original text , that both Paths of Kundalini Yoga , Samaya and Kaula ways are shown in the epic. What is of paramount importance in this work is that each exposition refers to a cluster of references germane to the main discussion. Hence it is obvious that this work is a scholastic paradise to people who are conversant with Sanskrit literature and other ancient scriptures. A pedestrian reader cannot even peep into Shodasi . Seshendra’s introduction “One word to begin with “sets the tone and tenor of the work. He dilates at length how Sanskrit language is moulded by Valmiki on the lines of Sruthi and Veda to envelop his central theme in suggestive and oblique style. It is said Valmiki wrote Ramayana in 24 thousand Shlokas taking each syllable of Gayatri Mantra, which has 24 syllables. Seshendra Shows convincingly, where the Gayathri Mantra itself is located in Ramayana. He says “ Sundara Kanda “ is the heart of Ramayana and Trijata ‘s Dream is Sundara Kanda’s heart. “ Maharshi created an apparent episode of “Trijata Swapna “ and through this he embedded Gayathri Mantra in it. “ This book is replete with several such revelations and unnerving observations. The chapters on “ Relationship between Ramayanayana and Megha Sangesham “ “Indra s